Every Sunday we post an image, and for the next six days we take turns to write something inspired by that image. There’s an open invite for you to take the challenge yourself – let the image inspire you to write something, and post it either to your own website, or the forum here.

This page has been set up to showcase a typical week at Elephant Words. We hope you enjoy what you see, and decide to look around some more. 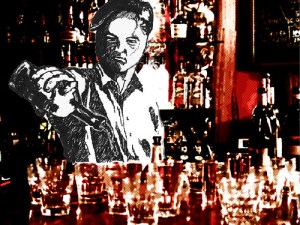 This image inspired six very different pieces of writing. Excerpts of each follow, and you can read each post in full by clicking on its excerpt. Once you have, you can leave a comment on the post or in the forum, or navigate to the next or last piece using the calendar or the links at the top and bottom of each post.

“To All The Girls I’ve Loved Before” by Rol Hirst

“Whisky. Doubles. Line ‘em up. And keep ‘em coming till I tell you otherwise.”

“Hey, it’s a slow night. I sometimes find a story helps pass it quicker. Only if you want to though.”

“I Don’t Want To Take On Me” by Josh Hechinger

Girls who make you mixtapes are the best girls in the world. On this, I shit you not.

Anyway. This one girl? She made a friend of mine a mash-up mixtape once. This was before the Grey Album, before mash-ups became a thing. Which means this girl was, like, foreseeing a whole musical…thingie…just to covertly tell my friend she liked him.

We should all be so lucky.

“There’s Always Someone New For It” by Douglas Noble

When they first arrived, slipping in between cracks and fissures, sliding under doors and past hinges, it was as though they’d been here forever. You’d see them on the street, all shimmer and stop-motion, but you wouldn’t stop yourself to stare.

‘Alcohol’ was ‘al-ghul’ in Arabic, an old borrowed word that wormed its way into English. It literally means ’spirit’, which makes you smile on the inside. And somewhere, somehow, it also split off and became ‘ghoul’. There’s baggage attached to that word, and magic too. But it’s not the proper word for the occasion.

‘Sure, I can taking a freakin’ joke,’ said the Captain as he poured a second shot from the glass-green glass bottle.

Harris Pax and Jonni Sood walk down into their favourite pub. The pub sits underground, and in the heat of the first of the hottest summer days of the year, it is a relief to be in the cool. Not for these two the peculiar pleasures of the great new English tradition of the binge drink, nor its companions the angry head, and the sun-burnt naked chest.

The pub, by the way, is called Best Bar None, and there’s not much more you need to know about it, beyond that it’s gloomy and yet paradoxically more friendly than the other pubs on this Southerton high street, and its setting wrestles with the owning brewery’s desire to see it trendy.

As you can see, a week at Elephant Words can feature any sort of writing, telling any sort of story, or even not telling a story at all!

Why not give it a try yourself? We’d love to see what you come up with!

Either tell us what you’ve been up to in the comments of the relevant image post, or post it up in the forum! Remember, it can be any sort of writing, in any style and genre… The only rule is that you have fun writing it!

Elephant Words (est 2007) is all about seeing how different writers respond to the same image.
Every Sunday a new image is posted, and during the week new short writing is posted inspired by that image.
The writing can be any format or genre, limited only by imagination!

(And a word limit)

If you like what you read here, please consider leaving a comment or sharing us with others.

Or just reading some more!

If you're interested in writing for us, email nickpapa (at) elephantwords.co.uk